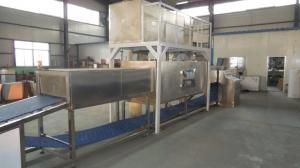 Low temperature freezing can effectively inhibit the growth of microorganisms, thus maintaining the quality of pork for a long time. Frozen meat is one of the most important raw materials in the meat and meat products processing industry. When thawed, the melting of the ice crystals will lead to the loss of a lot of juice, which will lead to the loss of flavor. Improper thawing methods or parameters can have a significant impact on the quality of raw meat, such as juice and nutrient loss, as well as subsequent processing and the final taste and color of the dish. 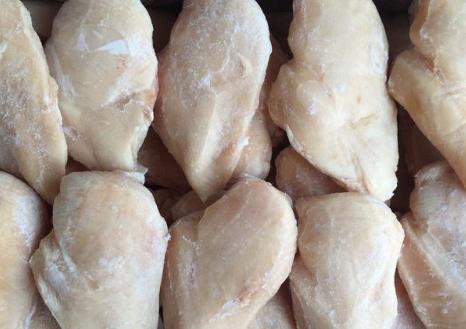 Microwave thawing method is to use the dielectric properties of frozen meat to generate heat under the action of the alternating electric field at the frequency of 915 MH or 2450MHZ, so as to achieve the effect of thawing. The biggest characteristic and advantage of microwave thawing is high speed and efficiency.

Jiangsu Mr. Wen plans to increase production, the original traditional thawing method is far from enough to meet the capacity, Mr. Wen found on the Internet the way of microwave thawing, to our plant inspection.

Before thawing, weigh the quality w1 of the chicken. After thawing, gently dip the meat juice on the surface of the meat with absorbent paper and weigh the weight w2 again.

Then calculate according to the following equation:

Two pieces of frozen chicken at -18℃ were taken, weighing 9.53kg and 9.49kg respectively. 20kw microwave defrosting equipment was used, with the power set at 1000w and the microwave effect for 10 minutes. The temperature at the center of the chicken was measured at 1℃, and much water was drained from the surface. The weight measured by drying water was 9.21kg and 9.19kg respectively, and the meat loss rate was 3.3% and 3.1% respectively. Considering that the next process cannot be consumed in time after the customer defrosts part of it, the defrosting temperature should be appropriately lowered to ensure that it will not completely melt after being left for a period of time.

Two more frozen chicken were taken and weighed at 9.60kg and 9.58kg, respectively. The microwave defrosting time was adjusted to 8 minutes, the center temperature was measured at -2℃, the moisture was sucked up with absorbency paper and weighed at 9.41kg and 9.36kg, the meat loss rate was 2% and 2.2%, respectively. The experimental results were good and the customer was very satisfied.

A 20kw microwave defrosting equipment customized for the customer, covers a small area, has no complicated water pipe connection and no sewage discharge, and only has a closed cooling tower, which improves the efficiency and saves the space of the factory.

Thank you! Your message has been sent to the following suppliers.